Note: Bible Gems post #264, “Giants—Myth or History,” generated some excellent questions. Giants—Revisited Part 2 continues to explore these questions. While Bible Gems is not a debate forum, questions and comments are welcome and will be posted at the moderator’s discretion.

This was the position taken by John Calvin, among others, who wrote: “It was, therefore, base ingratitude in the posterity of Seth, to mingle themselves with the children of Cain” —EBC, in loc.

This interpretation assumes that Scripture has clearly defined Seth’s family tree as a “holy line” and Cain’s family tree as an “unholy line.” While it is true that Genesis 4:25 through 5:32 develops the ancestry of Noah (5:29-32) all the way back to Adam and Eve’s son, Seth (Gen. 4:25), nothing is taught in these verses concerning a “holy” / “righteous” line versus an “unholy” / “unrighteous” line.

More importantly, the wording in Genesis 6:1-2 is intended to convey an obvious contrast between the “sons of God” and the “daughters of men” that resulted in the appearance of the “Nephilim” (a race of giants, as we saw in Biblegems #264) — “the heroes of old, men of renown” (v.4). The phrase “sons of God” is never used in the Old Testament of the line of Seth, before or after Genesis 6. “Sons of God” is consistently used in the Old Testament, however, in reference to angels, beginning with the book of Job—arguably one of the oldest books of the Old Testament:
Job 1:6  Now there was a day when the sons of God came to present themselves before the LORD, and Satan also came among them.

“Sons of God” here in Job, typical of Old Testament usage, clearly refers to angels. Not only so, but the wording of Genesis 6:1-2 in Hebrew conveys a sharp contrast between the “sons of God” (Heb. “benei ha elohim”) and “the daughters of humans” (Heb. “benot ha adaham”). A tightly literal translation of Genesis 6:1-2 reads:
“When Adamites began to increase on the face of the earth and daughters were born to them, the sons of Elohim saw the daughters of Adam were pleasant and they took (Heb. yiqchu) any of them they chose.”

The most natural, straightforward reading of the text contrasts the “sons of God” with the “daughters of men” as those representing two different lines of origin, not two lines of Adam.

Both the context and terminology strongly favor the interpretation of “sons of God” as referring to angels, not descendants of Cain. And while this creates other issues scientifically and theologically, those issues also find their answer in God’s Word. We will explore some of these difficulties in future posts. And as we do, we will keep before us this guiding principle: biblical interpretation is not the handmaiden of science.  Science ceases where observation cannot go and experimentation is no longer possible. God’s Word reveals the truth. At times, the truth and scientific understanding seem at odds. When that is the case, the truth will always win out and science may catch up…or not.
Deut. 29:29  The secret things belong to the LORD our God, but the things revealed belong to us and to our children forever, that we may follow all the words of this law.
Posted by Pastor Coleman at 5:00 AM 2 comments: 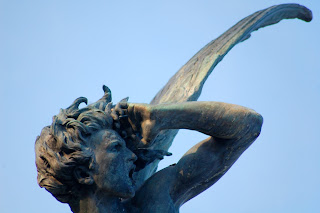 Last week’s post, “Giants—Myth or History,” generated some excellent questions. These questions will be addressed in this and subsequent posts.

There are three theories on the identity of the “sons of God” in Genesis 6:1-4, all of them controversial.

Identifying the “sons of God” as fallen angels has been a widely held position throughout church history.[i]

This has been challenged in recent times, based on the theory that angels are sexless, incapable of interbreeding with humans. Billy Graham popularized this theory in his book, “Angels: God’s Secret Agents.”[ii] He interprets Matthew 22:30 to mean: “The Bible teaches that angels are sexless.” Here is the passage:
Matt. 22:30  At the resurrection people will neither marry nor be given in marriage; they will be like the angels in heaven.

To assume this means that angels and resurrected humans are sexless goes beyond the meaning of the text. The Bible teaches that God designed the male / female nature of mankind as an “image” in the created realm of God, who is Spirit (Gen. 1:27). Nowhere does Scripture suggest that humanity becomes gender-neutral in the resurrection.

Additionally, the term “sons of God” is used only of angels in the Old Testament (Job 1; Job 38:7; Ps. 29:1; Ps. 89:7). The Septuagint (Greek translation) of Genesis 6:1-4 translates “sons of God” as “angels.” In the New Testament, Jude 6-7 specifically mentions “…the angels who did not keep their positions of authority but abandoned their proper dwelling—these he has kept in darkness, bound with everlasting chains for judgment on the great Day. In a similar way, Sodom and Gomorrah and the surrounding towns gave themselves up to sexual immorality and perversion. They serve as an example of those who suffer the punishment of eternal fire.”

Only Genesis 6:1-4 matches Jude’s description of angels committing immoral acts similar to that taking place in Sodom and Gomorrah.

Peter also refers to these disobedient “spirits” that God has since ”imprisoned”:
2 Pet. 3:19-20 “…the imprisoned spirits—to those who were disobedient long ago when God waited patiently in the days of Noah while the ark was being built.”

Finally, angels often change into human form in Scripture. Who is to say that genetic duplication is not involved, especially given the biblical evidence above supporting the interpretation that the “sons of God” are fallen angels?

How appropriate that Jesus “…has gone into heaven and is at God’s right hand with angels, authorities and powers in submission to him” (1Pet. 3:22).