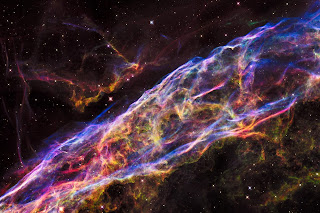 Question: According to NASA, the Veil Nebula is the debris of a supernova that occurred 8,000 years ago. How does this fit in the Genesis portrayal of a universe created in six days only thousands of years ago?

According to Genesis, stars and galaxies came into existence at once by God’s command on day four of creation (Gen. 1:14-19).
Furthermore, the genealogical record between Adam (created day six, year one) and Abraham (c. 2150 B.C.) covers approximately 2,000 years. That places creation week at roughly 4,000 B.C. —only 6,000+ years ago.

Current scientific theory proposes that the Veil Nebula is the vast debris field of a blue star once twenty times larger than our sun that grew old and eventually exploded. According to NASA—
“The fast-moving blast wave from the ancient explosion is plowing into a wall of cool, denser interstellar gas, emitting light. The nebula lies along the edge of a large bubble of low-density gas that was blown into space by the dying star prior to its self-detonation.”[i]

The estimated explosion date?
“The Veil Nebula arches into graceful loops over a large region in Cygnus. Earlier estimates of its age were in the tens of thousands of years. In 2001, however, Sky & Telescope (2/2001) reported a surprise. By comparing Hubble views with photographs taken in 1953, astronomers recalculated its age at 5,000 years.”

That fits well within the Genesis time frame of creation. But what about the billions of years required for the formation of stars out of the Big Bang before a blue star eventually turns supernova?

The belief that stars are billions of years old is based on the assumption that stars take a certain amount of time to form. What evidence is this assumption built upon?

In fact, this assumption is based upon one more assumption: that the processes we see at work in nature now have always been the same and do not change. The Bible predicted that this Uniformitarian Principle would drive people in the Last Days to ridicule those who trust God’s revelation in the Scriptures:
2Pet. 3:3   First of all, you must understand that in the last days scoffers will come, scoffing and following their own evil desires. 4 They will say, “Where is this ‘coming’ he promised? Ever since our fathers died, everything goes on as it has since the beginning of creation.” 5 But they deliberately forget that long ago by God’s word the heavens existed and the earth was formed out of water and by water.

Secular scientific theorizing must assume natural forces of cause and effect without any purpose or design. In contrast, the God of creation intentionally reveals that every aspect of the universe exists by design…
Psa. 147:4   He determines the number of the stars
and calls them each by name.

Posted by Pastor Coleman at 12:01 PM No comments:

Is America Represented In Daniel 7:4?

Daniel 7:4 reads:   “The first was like a lion, and it had the wings of an eagle. I watched until its wings were torn off and it was lifted from the ground so that it stood on two feet like a man, and the heart of a man was given to it.”

The Eagle
The lion with the eagle’s wings in Daniel 7:4 represents Babylon, not America. Here’s why:

Daniel 7 re-introduces the prophecy of four great empires from Daniel chapter two. The rise and fall of these empires is represented by four “beasts,” beginning with Babylon, where Daniel lived as a Jewish exile. Babylon is followed by Medo-Persia, Greece and Rome (Dan. 7:16-17). The Roman empire in Daniel’s prophecy is revived in the form of a ten-nation confederacy ruled by the Antichrist in the Last Days, until the coming of the Son of Man (Dan. 7:19-22).

The lion in Daniel’s vision was the symbol of Babylon under king Nebuchadnezzar, and for centuries later. The Ishtar Gate entrance in Babylon was decorated on both sides with a long procession of yellow lions carved in high relief on blue-glazed brick. The eagle’s wings plucked from the lion’s side symbolized how powerful king Nebuchadnezzar had been humbled by his seven-year period of insanity for not acknowledging the sovereignty of God (Dan. 4).

Chapter seven, verse four
Finding a prophetic connection between a particular Bible chapter and verse number and a particular calendar event (or whatever) is simply bad biblical interpretation on so many levels. Here are just a few reasons why:

That means that for more than 1500 years the prophetic meaning of Daniel 7:4 would have held no meaning—because there was no Daniel 7:4 chapter and verse number!

It also means that interpreting chapter and verse numbers is not biblical interpretation at all…it is interpreting a Bible study system!

• Even if it were argued that God accounted for the chapter and verse study system in advance, who is to say that 7:4 must refer to America’s Independence Day? July 4 is also National Country Music Day and Sidewalk Egg Frying Day.

There is no biblical reason for interpreting 7:4 as July 4th (American Independence Day).

Correctly interpreting the word of truth (2 Tim. 2:15) recognizes that the Bible is the revelation of God’s will to mankind, not a mysterious puzzle to solve or code to break. We are not left to relying upon our own imaginations. The Bible means what it says and says what it means. Even when highly symbolic language is used, God supplies the meaning of those symbols in His Word, so that Scripture interprets Scripture.
Posted by Pastor Coleman at 6:00 AM No comments:

Is “Be Ye Perfect” Possible?

Question: Why does Jesus tell us “to be perfect” when perfection, this side of heaven is impossible?

In both the Old and New Testaments, the words translated most often into English as “perfect” (Heb. Tamam; Gk. Telios) mean perfect in the sense of “complete,” “mature” or “finished.”

The word first appears in Scripture in Dt. 32:4, where it says of God, “He is the Rock, his works are perfect (tamam), and all His ways are just.” Here, the meaning of perfection emphasizes the sense of “complete” or “finished”—a reference to His completed work on day six of creation in Genesis, where all He made was declared “very good” (Gen. 1:31). As the Scripture says,
Heb. 4:3b …And yet his work has been finished since the creation of the world.

Elsewhere in the Old Testament tamam carries the idea of flawlessness:
2 Sam. 22:31   As for God, his way is perfect; the word of the LORD is flawless.

In this case, being “made perfect” (telios) in love is viewed as a process in which some believers are further along than others. “Perfect” in this sense pictures a completed, finished process where the believer has come to full maturity in this matter of selfless love.

In a similar way, when Jesus says, “be perfect, therefore, as your heavenly Father is perfect,” He uses the word “perfect” in the sense of “spiritually mature.”

The word “therefore” makes it clear that Jesus is addressing a specific issue brought up in the preceding verses. Just before His statement about being perfect, Jesus challenges the popular saying among the Jews at the time, “Love your neighbor and hate your enemy” (Matt. 5:43). Instead, He says, those who truly want to be like God will “Love your enemies and pray for those who persecute you…” (Matt. 5:44). After all, He explains, God causes the sun and rain to benefit both the righteous and unrighteous (Matt. 5:45), so we should do likewise (46-47).

Posted by Pastor Coleman at 2:20 PM No comments: