The Tree For Healing In Heaven 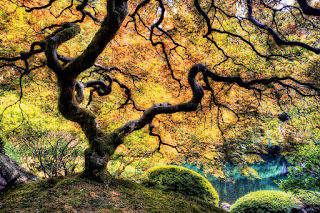 Question:  Why does Revelation 22:2 speak of a tree in heaven whose leaves bring healing to the nations if there is no more sickness in heaven?

Revelation 22:1-2  Then the angel showed me the river of the water of life, as clear as crystal, flowing from the throne of God and of the Lamb down the middle of the great street of the city. On each side of the river stood the tree of life, bearing twelve crops of fruit, yielding its fruit every month. And the leaves of the tree are for the healing of the nations.

John is allowed to see the creation of the New Heavens and the New Earth. The tree itself is located in the Holy City, the New Jerusalem, which has come “down out of heaven from God” to the New Earth (Rev. 21:1). In fact, God’s throne is located in the New Jerusalem, where He will dwell among His redeemed people on the New Earth:
Rev. 21:1-4  Then I saw “a new heaven and a new earth,” for the first heaven and the first earth had passed away…. I saw the Holy City, the new Jerusalem, coming down out of heaven from God… And I heard a loud voice from the throne saying, “Look! God’s dwelling place is now among the people, and he will dwell with them. They will be his people, and God himself will be with them and be their God. ‘He will wipe every tear from their eyes. There will be no more death’ or mourning or crying or pain, for the old order of things has passed away.”

The word translated “healing” is therapeiav (pronounced ther-a-pay-an), from which we get the English word “therapy.” Literally, it means, “to wait upon menially.”[i] It is sometimes used figuratively to express “serving” God in adoration and worship. It can also be used in the very specific sense of providing a “cure” for a disease.

In the context of the New Heavens and New Earth, healing of disease is no longer a concern (Rev. 21:4). Instead, the fruit of this tree “serves” as a constant supply of life-giving nutrition. This is exactly what was revealed to the prophet Ezekiel:
Ezek. 47:12  “And on the banks, on both sides of the river, there will grow all kinds of trees for food. Their leaves will not wither, nor their fruit fail, but they will bear fresh fruit every month, because the water for them flows from the sanctuary. Their fruit will be for food, and their leaves for healing.”

Both John and Ezekiel were given a glimpse into the eternal life we will enjoy in heaven where, in our resurrected bodies, we will enjoy the paradise of the New Earth. The “tree of life” in John’s vision is a singular, all-inclusive term for the “trees” of Ezekiel’s vision.

Finally, the word “nations” translates the Greek word ethne, meaning ethnic groups. All the peoples of the earth will be represented in the New Heavens and New Earth, enjoying the fruit of the tree of life:
Rev. 5:9  And they sang a new song, saying: “You are worthy to take the scroll and to open its seals, because you were slain, and with your blood you purchased for God persons from every tribe and language and people and nation.

[i] Strong’s Greek Dictionary.
Posted by Pastor Coleman at 5:00 AM 1 comment:

Did Moses Have A Second Wife? 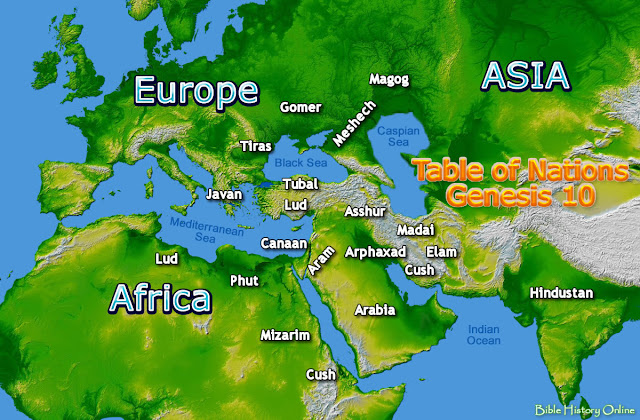 Question: According to Exodus 2:16-21, Moses was married to Zipporah, the daughter of Ruel, the priest of Midian. Does Moses later marry a second wife from Cush (Numbers 12:1)?

Here is the account in Numbers:
Num. 12:1  Miriam and Aaron began to talk against Moses because of his Cushite wife, for he had married a Cushite.

Zipporah, Moses’ one and only wife, was a Cushite from the land of Midian. Here’s how that came about…
“Cush” means “black.” Cush descended from Ham and was the father of Nimrod (Gen. 10:8), who became the founder of Babel and the Assyrian Kingdom.

As you can see from the map above, Cush is shown twice. This map represents the division of peoples who migrated from Babel (Gen. 10). Cush is located on the northwest shore of the Indian Ocean, just below Arphaxad and Elam, and then again on the southwestern shore of the Red Sea (not named on the map) across from Arabia, on the African Continent just south of Mizarim. The reason for this is that the people of Cush (ancestors of the Ethiopians) first settled not far from the Tigris and Euphrates rivers in what is now southern Iraq. They eventually migrated around the Arabian Peninsula to Africa, settling along the coastline as they went.

The Midianites, named after Midian, the fourth son of Abraham (Gen. 25:2), were the principal tribe responsible for the Arab peoples. In Moses’ day, they were nomads who dwelt in the desert of north Arabia, pasturing their flocks on the fertile Sinai Peninsula. The Midianites controlled most of Arabia and the peoples who lived there, including those descended from Cush.

Moses’ wife Zipporah (whose name means “bird”) was the daughter of Ruel, a descendant of Cush (Numbers 12:1) who served as a priest in the land of Midian (Ex. 2:16). Her father is later referred to by the name Jethro (Ex. 18:2), which translates as “Excellency,” and likely refers to his priestly title. This could be compared to an Asian or Hispanic serving today as a Catholic priest in Italy.

When Moses fled Egypt, he found safety in Midian. It was there that he came to the rescue of Zipporah and her six sisters who were threatened by some ruffian shepherds. Out of gratitude, the Midian priest took Moses under his protection and offered him his daughter Zipporah in marriage (Ex. 2:16-21).

Many years later, during the Exodus from Egypt to the Promised Land, Moses’ sister Miriam succumbed to jealousy over Moses’ leadership and attempted to use his mixed marriage as leverage against him:
Num. 12:1  Miriam and Aaron began to talk against Moses because of his Cushite wife, for he had married a Cushite. “Has the LORD spoken only through Moses?” they asked. “Hasn’t he also spoken through us?” And the LORD heard this.

God’s quick and decisive judgment upon Miriam (Num. 12:4-15) highlights several spiritual truths, among them:
Acts 10:34  “…God does not show favoritism but accepts from every nation (Gk. ethne, i.e., “ethnic group”) the one who fears him and does what is right.” 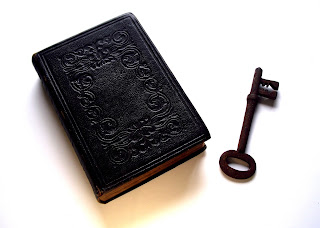 The confusion stems largely from difficulties in translating some generalizations from Hebrew to English. Below, my translation aims at reducing the confusion.
Gen. 2:5 [So there was a time] before any shrubs appeared on the earth and before any grass of the fields began to grow (because the Lord God had not sent rain upon the earth and there was no man to work the ground, (6) but a mist came up from the earth that irrigated the entire surface). (7) So the Lord God formed the man from the earth and breathed life into his nostrils and the man became a living soul.

Genesis 2:1-4 provides a conclusion for the order of creation events in chapter one.

Verses 5-7 introduce a shift in focus away from the order of creation in general to the creation of Adam and Eve in particular. They set the scene for Adam and Eve’s role as caretakers of earth, beginning in the Valley of Eden (2:8-17).  The scene is also set for how destructive Adam and Eve’s disobedience will prove to be to God’s creation. The “shrubs” and grain fields (“grass of the fields,” v. 5) God freely provided for their pleasure and their food, irrigated by a perpetual mist, would shrivel up, grow weeds and thorns and require constant effort against hostile elements as a result of their sin:
Gen. 3:17-19  …“Cursed is the ground because of you; through painful toil you will eat food from it all the days of your life. It will produce thorns and thistles for you, and you will eat the plants of the field. By the sweat of your brow you will eat your food until you return to the ground, since from it you were taken; for dust you are and to dust you will return.”

Even the lack of rain in those early days is noted, because rain was not yet a necessity. Later, rain would become a much-needed blessing:
Ps. 147:8  He covers the sky with clouds; he supplies the earth with rain and makes grass grow on the hills.

It would also become a source of devastation:
Gen. 7:17, 24  For forty days the flood kept coming on the earth, and as the waters increased they lifted the ark high above the earth.   The waters flooded the earth for a hundred and fifty days.

Genesis 2:5-7provides a segue from the “why” and “how” of creation (chapter 1) to the tragic impact of Adam and Eve’s sin (chapter 2). Together, they reveal God’s total sovereignty over His created universe as He provides both judgment for sin and salvation from what would otherwise be eternal consequences of that judgment.


Rom. 6:22-23  But now that you have been set free from sin and have become slaves of God, the benefit you reap leads to holiness, and the result is eternal life. For the wages of sin is death, but the gift of God is eternal life in Christ Jesus our Lord.
Posted by Pastor Coleman at 5:00 AM No comments: